Almost nothing was more loved by Walt Disney than trains.   From his childhood days in Marceline, Missouri listening to the railroad in the distance to as an adult building a miniature locomotive in his backyard that you could ride known as the Carolwood Pacific Railroad.   Some have jokingly said that one reason Walt build Disneyland was as an excuse to have a full-sized train.  The Disney Railroads are one of the first things you see when you enter and it is one of the few attractions that can be found at every Disney park around the world.  Another love of Walt’s was miniatures.  He built a very impressive collection of miniatures.  Before he opened Disneyland, he discussed opening a public display of his miniatures and even considered taking his collection on tour via, you guessed it, a train.  This collection was to be called Disneylandia and occurred before he opened any theme parks and in many ways laid the ground work for what become Disneyland.  Some of it can be seen on display at the Walt Disney Family Museum in San Francisco, California.   So, when my daughter asked to build a model train set I thought “What could be more Disney than a miniature model train set?”  I like to think Walt would like our set.

My daughter loved her set of Geotrax when she was younger.  Geotrax was a modular interlocking rail and road system put out by Fisher Price.  It was like a model train set for toddlers.  Remote control cars and trains were wirelessly controlled with hand held devices.   We picked them up at Target on clearance initially.  Over the years we added pieces to it, a Geotrax Pixar Cars set was released, and we found pieces from the Monorail set they sell on Disney property at the resorts and toy stores.  Eventually her builds began to look more and more like a fictional Disney World.  She took up most of the basement floor.  She populated her town with the little PVC figures you can buy at the Disney Store in sets from the various films.  She eventually even made a Spaceship earth from a kickball covered in tinfoil, and a Sorcerer Mickey Hat from the studios out of curled up poster board. 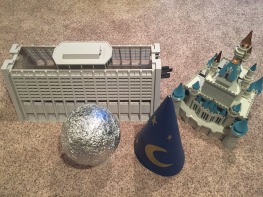 One day after seeing an actual model train set the idea was brought up by her to make a Disney train set.  I was had a model trains when I was a kid, but I love making miniatures.  One of my dream jobs would be to make those amazing miniature dioramas Disney build to visualize the various theme park expansions like the new Fantasyland or Star Wars Galaxy’s Edge.

So, we began another adventure together, creating a fictional Disney town as a model train layout.  After some research, we found that a version of Walt Disney’s Carolwood Pacific Railroad with the Lilly Belle engine was produced in the HO scale of train, or 1:87 scale, by Bachman trains.  For those who are not knowledgeable about trains HO scale is in the middle of the various scales.  It is not the smallest or largest size.  3.5mm (or 9/64 of an inch) equals 1 foot in the real world so a car is less than an inch wide, and the doorway is about an inch tall.   We also found that an HO scale monorail was also produced by a E-R models, and had a striking resemblance to the one found at Walt Disney World, complete with various colored stripes.

We decided to dedicate a 4-foot by 8-foot area of a basement to a train table.  It would be half amusement park and half town.  It would be made up of a combination of buildings from Disney/Pixar films and buildings in the various Disney Parks.  The Lilly Belle steam engine would run around the whole table while the monorail ran around the fictional park.   A majority our pieces would be built from scratch, and a small percentage would be heavily modified existing kits to look more accurate.  We would use our extensive research from our Lego builds to create very accurate buildings.  We would work on each one together.  I would do a majority of the construction, and she would help paint and detail the pieces, as well as helping to plan what would go into the town.  We both sign and date the bottom of each piece as they are completed.  As the town began to evolve we decided to light each house which very small LED lights. This meant we had to seal them off so light would not come through the paint or cracks. We could then also create accurate internal details. 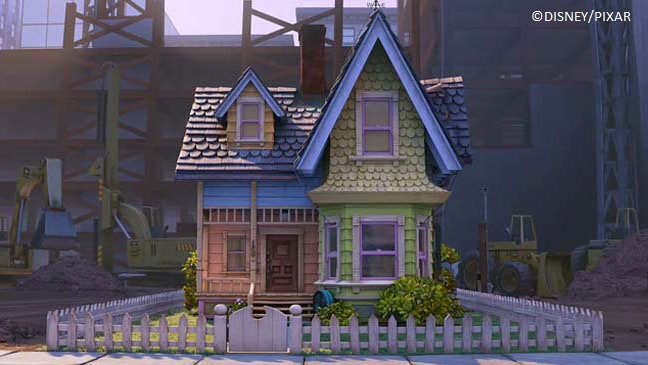 Our first build was Carl and Ellie’s house from the Pixar film “Up”.  It was created completely from scratch using sheets of Polystyrene.  Polystyrene is plastic that can be bought in strips, rods, sheets and more.  They even come with various textures like siding and brick.  It is easily cut and glued and can be bought at most hobby stores.   I typically buy the Evergreen Scale Models brand but will occasionally use a company called Plastruct.    The builds must be planned meticulously and cut and assembled with great care.  I often use a computer or graph paper along with countless reference photos from the films.  In future posts, I will go more in depth with how to build these buildings, but here is our first building The Fredricksen house from UP.

I constructed the house and we painted it together, she did the roof and much of the weathering.  We tried to capture all the details down to the numbers on the front porch, the garden hose reel, and the hand prints on the mailbox.   Keep in mind the entire house is about 3 inches tall.   It was designed to be lit in the final train table build, which is when the plants will go in as well.  When it will be lit you will be able to see into the rooms so we included on extra special touch. 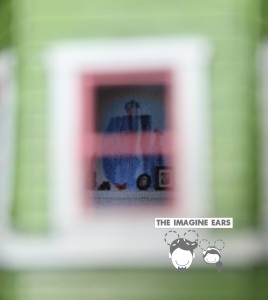