Last month I showcased the Lego model of the Magic Kingdom  my daughter and I made  and its centerpiece, Cinderella’s Castle.  As with all the pieces these were designed from scratch using photos and satellite images.   While deciding what piece to show you next, I decided the best route would be to travel through our plastic park as you would travel through its real-life inspiration in Orlando.  Nothing really encapsulates Walt’s vision for harkening back to the simpler times of yesteryear, and the unspoiled stroll down the wholesome streets of his beloved Marceline, Missouri, than the train station.

As you come around the corner from the buses and monorails or up the incline from the ferry, you will immediately see the train station.  It towers over the entrance in a way that urges you to look up enthrallingly to this landmark of bygone times.  With each passing year, this area becomes even more nostalgic, as we move further from the age of train travel and steam.   It pulls you in, as most of the landmarks in the Disney Parks do, but also cleverly blocks the wonders that lay beyond its gates.  We have discussed Walt’s love of locomotives in previous blogs.  The placement of the station and the train so prominently in the entrance only further exemplifies this passion.   Most theme parks are content for a fence, a gate, or maybe an elaborate sign.  Not Disney World.  The entire structure basically serves as a picturesque gate.   You can walk up to it and take some pictures in front of it.   At various times of the year the hill is decorated with pumpkins or presents. Regardless of the time of year, you will always find a pristine garden area with a well-manicured face of mickey mouse in the center.   As you curve around the floral hill to enter the park by going under the tracks into a dark tunnel.

As you enter the tunnel you pass over one of my favorite signs in the parks, in fact I have a replica of this in over the stairs as you descend into our basement.  You enter a seemingly nondescript tunnel, and into the dark like the lights dimming in the theater.  As you progress forward you are momentarily blinded as your eyes struggle with the light ahead like the lights of a movie flickering into existence.   You emerge into an idyllic alternate reality; the tunnel has transported you back to a pristine past that never existed.  You travel back in time further as you walk down the street.  Even the streetlamps represent the idea of time travel as they move from gas lamps to electric lamps as you move down the street.

This was one of the earliest pieces we made for our LEGO park, so important is the train station to the adventure of Disney World.  One thing I learned through our ongoing project of building each building was all the little details these buildings have.  Toiling over google earth photos, family photos, & blue prints really makes you appreciate the intricacies of each structure the Imagineers build.  I could not incorporate all the details; the challenge is to get the look, outline, and feel of the building with the LEGO bricks that are available.   The next challenge is getting the scale of the structure.   Without getting into a lot of math and discussion of the calculation of scale, the simplest way to explain it is that I tried to use the height of one brick to be that of a door (roughly 7 feet).   A common use of a piece called the “headlight” is to flip the brick around and use the empty area for windows.   Those two pieces are all you really need to figure out your scale.  Then you can look at a picture and measure how many doors high it is.  Another key piece to making your model look right is trying to find the right color bricks.  There are only so many LEGO colors and they have changed over the years.  Sometimes my designs required a new color and others required me to find discontinued colors on eBay. 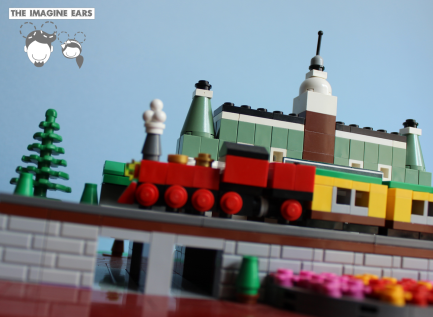 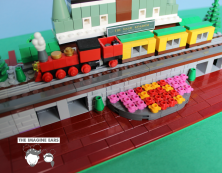 I felt that the iconic parts of the train station were the tower, the train, the tunnel you walk through, and the floral arrangements of Mickey’s face.    I knew I had to have those pieces.  A challenge I had was to decide whether to have the flowers flat with more options for detail or on a hill, or incline, for accuracy but less options for the flowers.     The scale might be a little off but I designed each piece to be modular and to connect with every other set we designed and build.  I am still pleased with how the piece turned out.   I will get back tour LEGO Disney World builds in four weeks.  Up next I will be sharing another one of our replica props.