Everyone has those special places that when they visit them harken back fond memories and bring a swell of emotion.  I have many, but one of the top ones is that moment and place when you emerge from the tunnel under the Main Street Train Station at the Magic Kingdom. 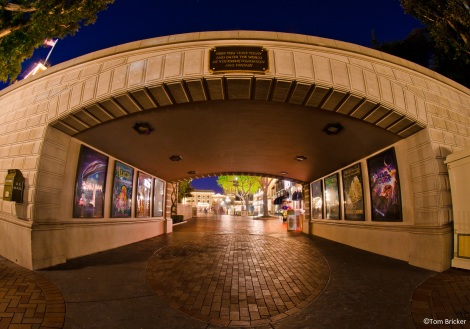 You enter a seemingly nondescript tunnel walk into the dark and emerge into the lights as your eyes adjust and enter the Magic Kingdom.   The music, the smells, the sights are overwhelming.  Yes, it is artificial and I am being manipulated, and I love it. I love the feelings and I admire how the park is designed to conjure these emotions (more on that in an upcoming post).   It is a swirl of emotions as I am simultaneously nostalgically reminded of every previous visit I have had and excited with the possibilities of what this trip will offer.  This is the next step in our scale model of the kingdom that we built in Lego.   We have already shown you Cinderella’s Castle and the Main Street Train Station. Our next step continues Where the train station left off, the Main Street Town Square.

The Main Street is modeled in part on every classic main street in America, but especially on Walt’s home town of Marceline, Missouri.   This connection to Walt’s past will be further strengthened when they complete the construction of a new theater just off of main street that is modeled after the iconic Willis Wood theater in 1920s Kansas City, Missouri where Walt moved around the age of 10.

The classic “town square” is modeled after the style of the early 1900’s and has 4 distinct architectural styles, one on each corner of the square.  The square is flanked on either side by a large theater on one side and the city hall, chamber of commerce, and fire house on the other. 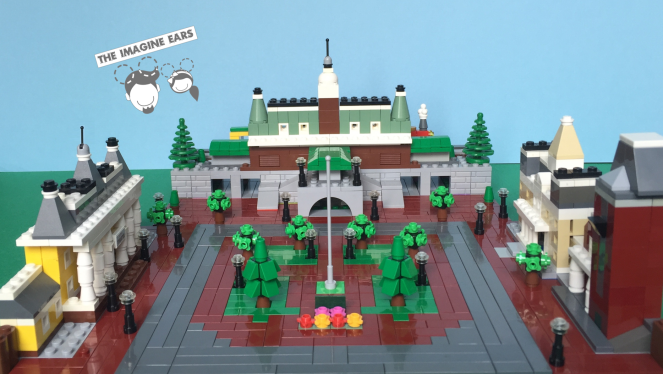 The courtyard square serves as an entrance hub that features usually a character meet and greet or two, the bronze statue of Roy Disney and Minnie Mouse, and the only actual regulation American Flag in the park.  You may be asking yourself, “Wait! There are flags all over the parks.”  Yes, you are correct but most of the flags don’t have the correct number of stars or stripes allowing them to be left up every night whereas the actual United States flag has to be raised and lowered each day.  This is usually performed by an active or retired member of the Armed Forces in a moving ceremony.

The Main Street Theater used to be called the Town Square Exposition Hall and has served as everything from a preview center for Epcot and Hollywood Studios during their construction, to Welcome center for the 25th anniversary to, a showcase for a great film called the Walt Disney Story.  It was redesigned and currently serves as a meet and greet for the amazing new interactive Mickey Mouse character as well as Tinkerbell.

The Chamber of Commerce is a where you pick up your packages you have bought throughout the day if you did not want to carry them or have them shipped to your hotel room on Disney Property.   The City Hall serves as welcome center and guest relations location.  The Fire Station now serves as the headquarters for the interactive Sorcerers of the Magic Kingdom scavenger hunt.