Imagine a towering toy story with an elaborate theme that is full of aisles bursting with toys.  It may sound like fantasy or something made for an animated film but not too long ago it was a common occurrence.  When I was a child there was a chain of toy stores called Children’s Palace. It has a castle facade with staggered rampart walls.  This was not 3-4 in a mega store wear they sell groceries.  This was not a “toy store”  that sold baby clothes and diapers too.  This was not some cramped and tiny store in a mall.   This was not some hollow experience of online shopping.

This was a huge store with 20 aisles of toys.  To put in in perspective the building that used to be the Children’s Palace now houses a massive Best Buy and the place was all toys.   Rows and rows of toys that went from the floor to the ceiling.  They did not have a Star Wars section, they had a Star Wars aisle.  I remember wandering the labyrinthine halls looking up to the heavens at all the toy possibilities.   Simply going to the place was a treat.   So when I saw Al’s Toy Barn in Toy Story 2 it did not seem fantastical or extreme it seemed familiar.  It reminded me of Children’s Palace.

Toy Story 2  was planned to be a direct to home video release in the style of most Disney animated films of that era.  Eventually after a troubled production it grew to be a theatrical release.   It suffers from a bit of middle picture syndrome.  It is definitely an improvement in the animation quality of its predecessor and features a larger world.  However, it is not nearly as groundbreaking as Toy Story 1.  Toy Story 3 just has some of the best humor, biggest adventure, and most heart of all of them.  That being said, Toy Story 2 still falls in the top half of the Pixar canon.  It introduces some great new characters in Jessie and Bullseye.  It also features what is possibly the 2nd most heart wrenching moment in the trilogy in Jessie’s lamenting “When Somebody Loved Me”.  That scene still gets me every time.  Each time I see that scene I feel a twinge of guilt for the toys I abandoned in my youth and I picture my daughter’s favorite stuffed animal someday being cast aside.  It is the same animal I picture in my mind each time Bing Bong fades away in Inside Out…gut wrenching.

As a huge fan of toys I knew the fictional town on our train table needed a toy story.  When planning the city portion of the table we simply thought what would we want in our fictional town.  We have already shared our Flynn’s Arcade, Lilo’s House, Rapunzel Tower, Up House, and Mystery Shack. 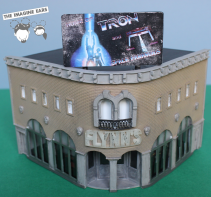 All of those builds were designed and built from scratch by us.  But we found a great barn kit by Bachmann Trains in a series called Plasticville.  The barn looked close enough to Al’s that we did not feel the need to build one from scratch. 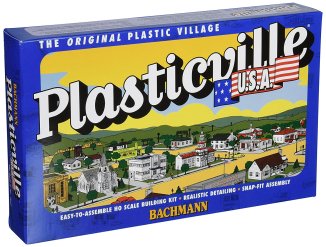 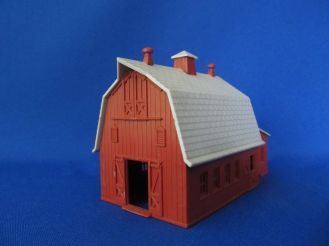 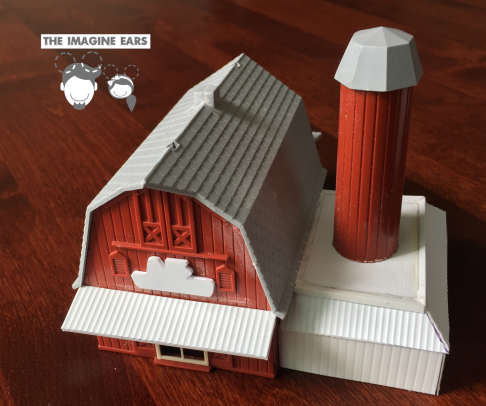 With some some slight modifications and custom additions using polystyrene the barn was easy to convert.   After the construction was done all we needed to was to paint it.  As always my daughter helped in the painting process as well as the weathering.  Remember this is 1:87 scale so the building is around 2 inches tall.   We added the custom cow jumping over the moon by making out of a thin sheet of polystyrene.  It is not 100% screen accurate but it is close enough for us.

To top it off we custom made a chicken statue using a small wood egg bought at craft store on a wooden checker for a base with some custom sculpting using apoxie sculpt.