When I am at Disney World I can’t get enough Haunted Mansion.  A trip into the Magic Kingdom would just not be the same without a cruise through Gracey Manor.  I loved the addition of the gift shop, Memento Mori, just outside the attraction.  For years there was not a lot of merchandise to be had.  There was a cart selling a few things.  But how could an attraction as popular and iconic as the Haunted Mansion not have a store?  I mean, it would not be a Disney ride if you did not have to exit through the gift shop and feel the immediate need to keep the love going through commerce.  If I had any suggestions to give them it would be to retheme the Columbia Harbor House, the seafood restaurant across from the shop and mansion, into a themed Victorian haunted restaurant.   If Pirates has the Tortuga Tavern and the Jungle Cruise has the Skippers Canteen why would you not have a themed dining establishment, especially in this IP (intellectual property) crazed direction the parks are seemingly headed.  Imagine if you entered through a sliding bookcase in the gift shop, went across the walkway inton the restaurant.  There could be cast members dressed in costume, interactive elements like at Be Our Guest, fun pun-based meals.   You can see the location where the purple utensils are on the map.  You could also put something to the side of the mansion between it and the river or out on tom sawyers island with a few of the mansion.

Sorry, that got away from there.  The Memento Mori gift shop was a well themed and fantastic addition.  A memento mori is anything that has someone consider the nature of life, the inevitability of death, and the utter futility of earthly possessions and pursuits.  I can’t help but feel that calling a gift shop Memento Mori is of the most inside and cleverest of imagineer jokes.  The use of memento mori was a practice used from Latin America to Feudal Europe to Samurai Japan.  The act was used to help one detach from the earthly distractions to consider the more eternal and important things.  The words Memento Mori, sound to the casual park goer like a memento or keepsake, but actually comes from to meminī or “to remember, to bear in mind” and Mori or morior, literally “to die”. In other words, “remember death” or “remember that you will die”.  Now the word just drips with that macabre curiosity that permeated Victorian spiritualism.  So, I love the name and the shop.  I can’t say have bought anything in the shop, other than where they take your photo and turn it into a lenticular changing image of you into a ghost.  I find the items pretty pricey and would rather make my mementos.  But, leave it to Disney to take a practice done by Christians and Buddhists to avoid possessions and turn it into a place to make money.  Too funny.

If you have missed our previous builds as we turn into home in the Haunted Mansion for our annual neighborhood Halloween party.  Previous entries include Nightmare Before Christmas jars, personalized entrance sign, the Hatbox Ghost, the Gargoyle Candelabra, the Madam Leota Seance projection, the Madam Leota Tombstone, the 13hr Monster Clock, the Haunted Organ, & miscellaneous touches. 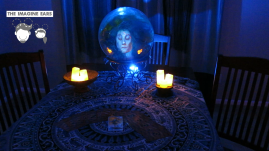 I started by taking some of the green insulation Styrofoam from previous builds and shaped the banners and eyeball design.  I used thinner boards for the eyes that are actually constructed out of 3 layers.  The base eye shape, the raised outline of the eye shape, and the further raised circular shape of the eyeball.  I smoothed the seams with wood putty, cut wood grain grooves with a Dremel rotary tool, and added a round piece I cut off a clear plastic Christmas ornament for inner iris with the face. 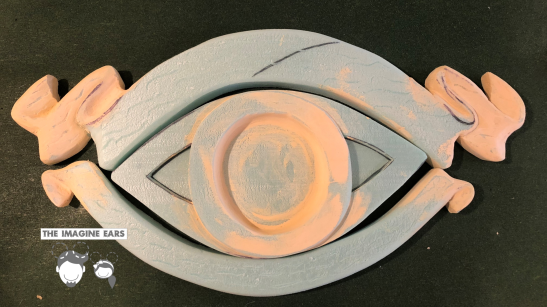 As for the letters it took a lot of research to find the right Victorian font.  The key indicator was the small protrusions off the middle of the letters.  I found out that is called a “spur” and was popular on fonts of the era.   It also had to have that scripted rounded elements that give the letters a fancy and ghostly look.  Eventually I found the exact font, Campanile.

Everything on our blog is designed with a “Do It Yourself” kind of approach.  So, you could easily paint the letters on the banners or project them on and trace them.  I have a friend with a laser cutter and because I wanted that 3-D effect I asked him to cut the out for me.  I designed the layout and shape and he graciously cut them out.

I painted the banners with a few different rattle cans of whites and blues trying to replicate the effect.  My airbrush would have been better but that is not really something the average person has.  The rest was painted with dark blue and white paints and brushes.  The filigree, stars, and ghost face were done with a green paint marker.  I mounted the sytrofoam pieces a thin piece of wood I cut to the right shape and painted black.  I used some hardware for hanging pictures and attached a chain.  I hung it off the staircase, so it hangs in midair directly in front of you as you enter our foyer.   I hope you like it.  The entire build cost around $30, the chain was over half the budget, paint was the remainder.

Check back next week for our next Halloween Haunted Mansion DIY project.