Early on in the Haunted Mansion ride you come through the conservatory that has a large collection of dark flowers and wreaths surrounding an elaborate and Gothic coffin.  Pushing up on the nailed shut lid are two decaying hands as an eerie green light emits from inside the coffin.  Perched on top of the raising coffin lid are two ornate candelabras.  The occupant tries to escape and says he wants out but he cannot, but the ride audio hints that Madame Leota might be able to make contact.

Sometimes you start a project and think to yourself, “This is going to be quick and easy” and then find out how utterly wrong you were.  This is one of those times.  The coffin was not too complicated to build but it definitely took some time with the waiting for the construction adhesive to cure which takes 24 hours to cure. Although I planned out the build thoroughly, it did end up being much bigger than I had envisioned which is fine because it now has a place of prominence in the annual Haunted Mansion Halloween party displays.

I started by using XPS foam (seen below), it is the kind the big box home improvement stores sell that is used for the siding of your house.  The build is similar in nature to our Haunted Mansion Clock if you want some pointers.  I simply cut the pieces using a long knife with break away blades (this is helpful as the foam dulls the edges quickly).  Always be careful when using a knife, make controlled, slow, and steady cuts that keep your hands and self out of harms way.   The entire build was made with two 4×8 sheets of  XPS foam, a one inch and a two inch thick piece.

Once I had the basic box done I began to add the top railing and side rails to give it some dimensionality.  I used the strongest construction adhesive they sell, Heavy Duty Liquid Nails.   I went through 2 caulking gun tubes during the build, but this thing is not going to fall apart.  Near the end I was running low on foam and I was not about to go buy another 4×8 sheet, so I spliced some runs together and filled in the cracks with wood filler. I also pushed toothpicks into the foam to hold it together while the glue dried.

The lid was a bit unwieldy and gave me some trouble.  I used my table saw, a tool I totally respect and simultaneously fear, to cut the lid.  I set the blade to a 45 degree angle and fed it through. This is a two person job for an experienced user who is wearing eye protection.  The job could be done with a razor blade extended out fully, but I wanted the clean cuts.  I used the angled left overs to act as supports under the lid railing. 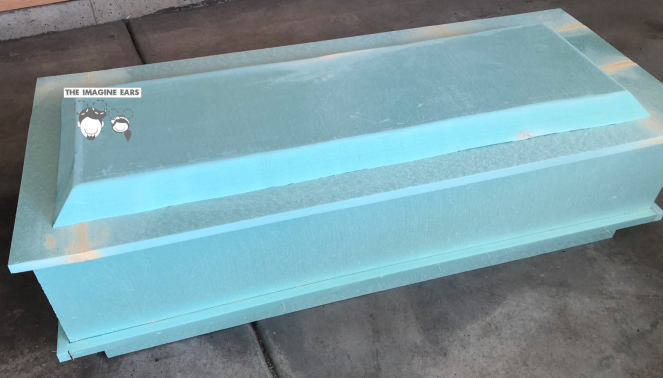 Some of the basic shapes I was hoping to imitate from the actual coffin were the bones at the bottom, the segmented round pieces by the bones, the three square frames in the middle, and the ornate winged creatures on the ends of the squares.  I did not attempt to capture the ends 100% accurately as they are very complicated and would have necessitated an end that was 8″ thick of foam at least.  I also settled for a bat as opposed to the winged creature which is very unique.  I looked at the creature from every angle in photos with the lights on and it still baffles me.

I added 3 dollar store 8×10 picture frames to the front.  I also found some cheap

Halloween decorative plastic fencing with bats on them.  I cut out 2 of them and left some of the curved elements to have some visual interest.  The round segments are cheap wooden disks that were $3.99 on eBay.  The bones came from a generic bag of bones $10.  and I took the longer arm and leg bones and cut them in half long ways.

Each piece was adhered with the liquid nails.  All in all it has all the elements that I think help make it recognizable.

When I was finished and the glue dried I gave the entire thing a coat of satin black house paint.

When it was dried I gave it a drybrushing, a technique where you use a lighter color applied lightly while hitting the higher points of a 3D object.  I used Testor’s Precious Metals leafing paint in silver to give the antique finish.

I took the forearms and hand of the bag of bones mentioned above and glued them together.  I build up the joints with a fishing lure maker technique of super glue sprinkled with baking powder and repeated to add reinforcing layers.  I also used a heat gun to curve the fingers into a gripping position.  Always be careful when using a heat gun, wear gloves and eye protection, and remember it is not hair dryer it melts plastic. 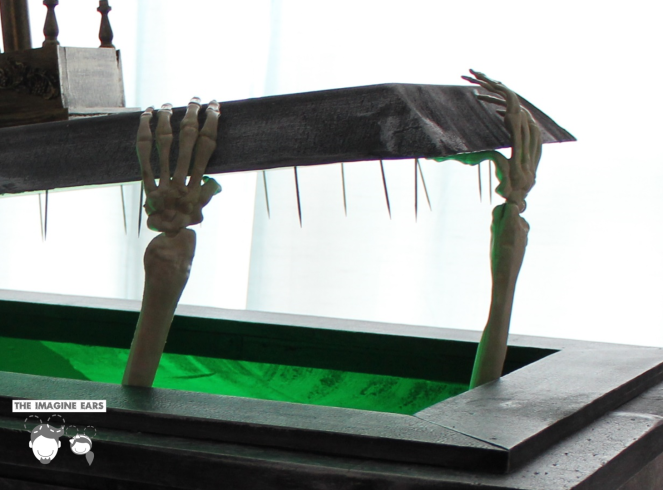 When I was done I rigged up some foam supports on the interior to hold 2 large PVC end caps I had on hand to act as holsters to hold the ends of the arms rest in as they extend out to hold the lid.

As for the interior lights I wanted something strong and bright but also safe and easy assemble and turn off and on.  I opted for a multi-color Dioder led light from Ikea that was around $30.   I hated to use such an expensive piece but their is nothing on the market close with all the above criteria.  The whole thing went together in lest than 3 minutes.  The pieces all plug into a central control box and each led light bar comes with adhesive strips.  I cut a small hole in the back and ran the controls out and attached to the back of the coffin with Command strips so I can turn it on with the push of the button.  If you want a party coffin the lights have a random mode that changes from color to color every few seconds. 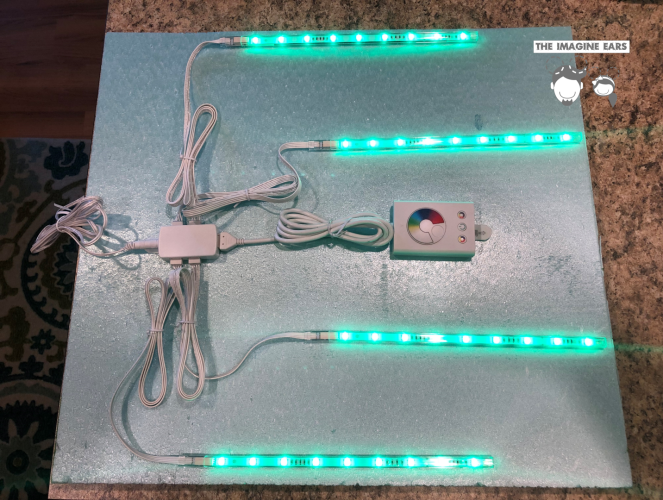 The last major component I needed to build were the ornate candelabras.  I simply made a simple base out of foam, cast some filigree our of resin, used a pvc pipe, a pvc coupling, and a pvc union.  All of that was pieces I had laying around.  The candles are a 2 pack from the dollar store.  I painted it black and then drybrushed the gold finish. 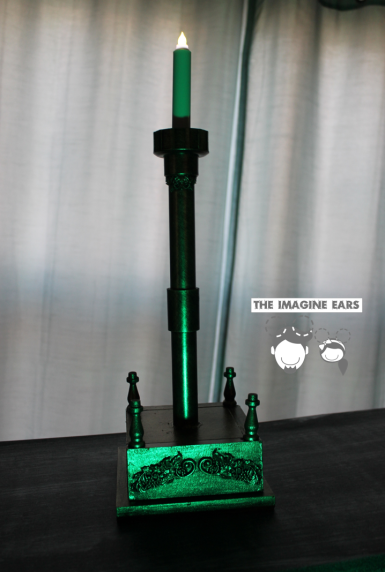 The finishing touches were some toothpicks painted silver to act as the nails.  I wanted something a little safer than actual metal spikes sticking out.

All in I think I spend around $80 on the build which is higher than the $40 limit I set, but this was my big build of the year. 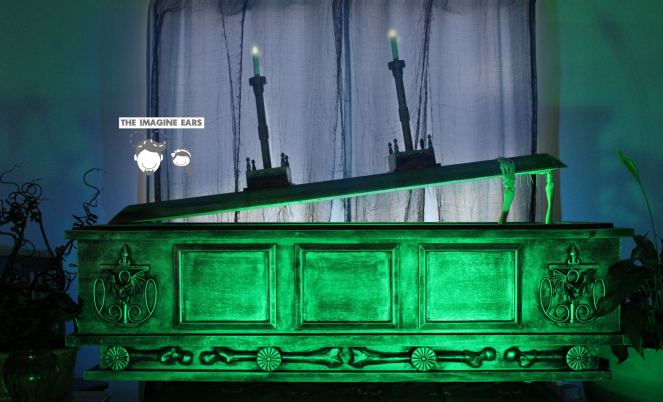 To display the piece I set on on the long dining room table, where Leota’s head projection used to go (don’t worry I just relocated the head to a new spot).  The coffin sits on the end in front of a large window with a tree outside, just like on the ride.  It truly is showstopper that greats my guests as the enter the foyer.  Now I just have to figure out where to store it from November to August.

Leave a Reply to The Imagine Ears Cancel reply