I thought it was fitting to post this blog on President’s Day and not follow our Funko Friday format.  In the 1970’s America was riding high on a wave of patriotism as the nation approached the 1976 Bicentennial celebration.  Red, white and blue was everywhere and everything had flags on it.  The space in Disneyland where the Carousel of Progress had been found since it was moved to Anaheim following the World’s Fair was recently vacated as the ride moved to Orlando to its present home in the Magic Kingdom.  America Sings filled the empty space.  The show was an humorous look at the various eras and styles of singing in America’s history. The show rotated in the theater, like its predecessor, and was hosted by and owl named Ollie and an eagle named Sam.

By 1988 the attraction had run its course as the bicentennial fanfare faded and the funny animal singing did not really fit in Tomorrowland’s futuristic aesthetic.  Many of the animatronics were reused throughout the new ride and finale of Splash Mountain.  I don’t mean reused like how they used some of the robotic skeletons on Star Tours, I mean they used the same animals with only a slight wardrobe change.

I wanted to capture this classic Disney attraction by making one it’s hosts, Sam the Eagle. My version of Sam features a custom made arrow and chest shield as well as an original sculpt on the head featuring rows and rows of feathers. 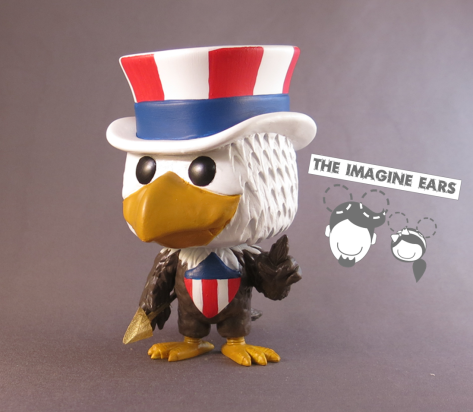